While I was a student pilot I had a friend and mentor who was an instructor at a big school in California. I gave him an outdated Canada Flight Supplement, the fat then-green [now blue] book that lists all Canadian airports along with their frequencies, runways, nav aids, services, and other information for pilots. He had already given me an equivalent book for California, the A/FD, and I wanted to show him how the information was presented differently in the Canadian equivalent. I thought ours was better, as it includes pictures, and fewer cryptic abbreviations for information required in flight. The FAA seems to agree with me about the pictures, because they've since added them to the American publication.

I've told you this bit and some other parts before, but it's a good introduction to the rest of the post. My friend flipped open the CFS and looked at the first entry that met his eye. "Huh? Why does it say they have Jet-A fuel for sale at an airport with a gravel runway? Why would someone land a jet on a gravel runway?"

Even then I knew enough about my country's geography to have the answer. "Because that's their destination, and it's the only runway for hundreds of kilometres, and it's too far from anywhere to serve easily with piston aircraft." Paving is difficult in remote locations. Gravel is easily relevelled when the ground heaves with the freeze and thaw. It's not as slippery as pavement when covered with ice, and once the snow is packed deep, it doesn't matter what kind of surface is underneath. Pavement is nice to land on, but it won't keep you from sliding off the end on a snowy day.

You need particular techniques and equipment to cope with northern conditions. A lot of it is simply being diligent in applying the techniques you already know. Land under control, at the lowest speed that is safe to maintain on approach, at the beginning of the runway, and with no sideways momentum. Sturdy landing gear and runway friction will forgive a multitude of sins, but if you're going even a little bit sideways at touchdown and there's limited friction, you'll keep going sideways until you meet some resistance, maybe a snowbank at the side of the runway.

Gravel that is not covered in snow actually allows for some very soft landings, maybe because it crunches slightly out of your way, spreading the deceleration from any remaining vertical speed over a longer time than wheels hitting pavement. I flew on gravel for so long I can remember the "whoa, lines!" feeling when I went down south and landed on a paved runway with paint markings. At startup, taxi, and takeoff on gravel you have to be careful not to damage the airplane with flying gravel. Many gravel airports have little paved pads you can park between, positioning your engines over them so that when you start up or apply taxi power, the propellers won't kick up gravel. With jets, the danger is the nosewheel launching gravel that subsequently gets ingested into the engines. Here, and this is the whole point of this post, I have some pictures of the B737-200 gravel kit, a modification that physically deflects gravel from being kicked up by the nosewheel and then pneumatically protects the engine intakes.

This excellent website on the B737 lists nine other modifications that go with the gravel kit, such as extra shields on cabling and a retractable anti-collision light. The page notes that in 1975 dollars, landing on gravel costs about $15 extra in maintenance costs, per landing. 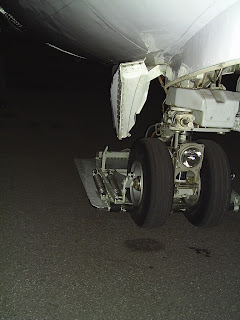 Above is the deflector on the front wheel. It looks as if it is resting on the ground, but there is actually a nine centimetre gap between the plate and the ground. Below you can see the vortex dissipators, spines that shoot out compressed air in front of the engines. 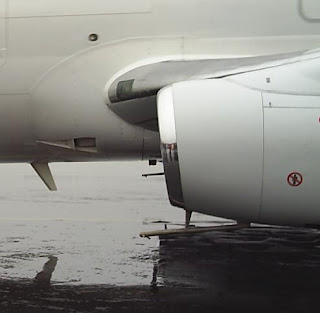 When retracted, the deflector serves acts as a gear door. There are more pictures and information at the website linked above.

Gravel kits are available for various aircraft. Here's one that caused a landing problem for a Challenger CL-600, when another problem combined with the gravel kit to jam the nosegear inside the airplane. No one was hurt, but there you go: there's no such thing as safety, just decisions you make to try to be safer than you would otherwise.

There's a piece of ATC dialogue I'm trying to find, where a pilot at an urban Canadian airport is following a northern airplane on the taxiway, and calls ATC to report that the aircraft ahead has a problem with their gear doors. It is, of course, just the gravel kit, with no problem at all.

Extra fact: The reader who sent me the above pictures is someone I met three different ways, once through this website, once through another website, and once through a shared sport. I never connected them, but fortunately she did.

What Aviatrix said, and also (probably most of the time) because the jet is a turboprop.

Never thought about the FOD issue. Imagine if you set an emergency down on a gravel strip and could not take off again? (Cargo Cultists, please ignore).

First entry in the CFS with Jet-A1 at a gravel runway... Alert maybe??

David, there are several gravel airports in Canada's north that are served, not only by turboprops, but also by regularly scheduled airliners like the 737s you see in the pictures on this post. Pretty interesting flying!

Aaron - I wanted to mention that Jet-A isn't just for jets, but you're right: as Aviatrix pointed out in her blog, big passenger jets do land on gravel runways in Canada.