Canada Day on the Road 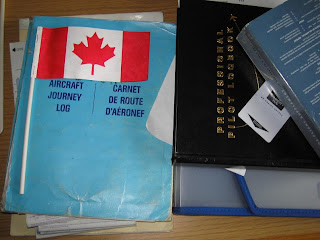 I took this picture last year, but it's still a pretty accurate depiction of my life on the road. The blue notebook is the aircraft journey log, in which every take-off, landing, malfunction and maintenance task is noted. It's a legal document, but not completely standardized, so if you're not careful, when you move from airplane to airplane you may be recording the air time in the flight time column. Often they have columns for weight and balance information, but I'm not obliged to fill those out as that goes on my operational flight plan. That's probably an OFP folded up under the pilot logbook, my own personal record of take-offs, landings and hours flown.

You can see the corner of a VFR chart peeking out under the journey log. The word SUD visible tells me it's a Canadian chart, that's French for south and it tells me which side to open the chart to. American charts have that too, of course, but only in English. It looks like there's quite a stack of charts in that picture. I must have been preparing for a ferry. Under the charts is an invoice book.

The fatter blue book is a Canada Flight Supplement, turned over to the back side that lists the components of a flight plan and of a PIREP. I find it useful to have those on the back there. You can pick it up and use it as a checklist as you're talking to ATC. I also see my hotel key card and the plastic sorting folder that is full of things like old OFPs, my copies of customer invoices and fuel receipts to be reimbursed.

And there on top is a Canadian flag, of the sort they give away at Canada Day parades, which is where I got that one. I didn't stay up to see the fireworks. I had to work early the next morning.

Happy Canada Day! Wherever you are celebrating it.